A Reflection for Proper 11, Year A
Prepared for the Red Door Healing Service, Grace and Holy Trinity Episcopal Church

Jesus put before the crowd another parable: “The kingdom of heaven may be compared to someone who sowed good seed in his field; but while everybody was asleep, an enemy came and sowed weeds among the wheat, and then went away. So when the plants came up and bore grain, then the weeds appeared as well. And the slaves of the householder came and said to him, ‘Master, did you not sow good seed in your field? Where, then, did these weeds come from?’ He answered, ‘An enemy has done this.’ The slaves said to him, ‘Then do you want us to go and gather them?’ But he replied, ‘No; for in gathering the weeds you would uproot the wheat along with them. Let both of them grow together until the harvest; and at harvest time I will tell the reapers, Collect the weeds first and bind them in bundles to be burned, but gather the wheat into my barn.’”

Then he left the crowds and went into the house. And his disciples approached him, saying, “Explain to us the parable of the weeds of the field.” He answered, “The one who sows the good seed is the Son of Man; the field is the world, and the good seed are the children of the kingdom; the weeds are the children of the evil one, and the enemy who sowed them is the devil; the harvest is the end of the age, and the reapers are angels. Just as the weeds are collected and burned up with fire, so will it be at the end of the age. The Son of Man will send his angels, and they will collect out of his kingdom all causes of sin and all evildoers, and they will throw them into the furnace of fire, where there will be weeping and gnashing of teeth. Then the righteous will shine like the sun in the kingdom of their Father. Let anyone with ears listen!”

When I was young, we lived in a very rural part of upstate New York. First we lived on a farm…it belonged to my grandparents…and then when I started school, we moved to the nearby town, population 1,500 people and probably as many cows. My extended family still lived on or near the farm, the lands and fields around which were part of my family’s property.

My grandfather, before he died, gave each of his children an acre of land on which to build a home. Many of my relatives did this, but my parents moved to town closer to where my mother worked and thus, they had an acre of land sitting unused. My mother…the frugal daughter of a farmer and an elementary school teacher who had summers unscheduled…decided that we would use our acre to plant a garden. There was a well and a pump on the property, so buckets of water could be carried from yards away to water the rows of vegetables even though the garden was miles from our actual house.

At first, I loved this idea of a big, bountiful garden. My uncle plowed up the soil with his farm-sized cultivator and we went to the seed store where there were bins and bins of bulk seeds for peas, beans, and corn. We had onion sets, and potato starters as well as teeny, tiny seeds for carrots, lettuce, swiss chard, and beets. Then there were summer squash, zucchini, and cucumbers which were planted in big mounds instead of rows. Tomatoes were the only things we started from small, seedling plants to give them a head-start in our northern climate. Last, but not least, were the seeds I was going to plant in my own corner of the garden: watermelon seeds, pumpkin seeds and a little package of “Peppermint Patty’s Parsley” that I had gotten as a free surprise inside a bag of wonder bread.

Planting was so much fun. The soil was loose from the cultivator, and plopping the little seeds in their rows and furrows filled me with images of perfect little plants yet to emerge. Better yet was when the seeds started to grow! Tiny seedlings of all these different shapes and sizes. My Mom taught me how to recognize the plants by the shape of their tiny leaves, and the color of their sprouts. This gardening thing was great, I thought.

And then came the weeds.

This acre of garden had been, until that summer, an uncultivated field of wild grasses and weeds. Those weeds, it turns out, also had seeds that had naturally scattered into the garden and some weeds had roots that went further down into the soil than even my Uncle’s cultivator could break up. From the joy and potential of planting in late spring came the arduous summer of the weed. My mother’s morning declaration of, “get dressed, we’re going to work in the garden!” turned from a fun outing to a dreaded task. I’m sure I probably didn’t hide my feelings well, but I knew better than to protest outright. My mother made a deal with me: as soon as I finished taking care of my garden chores, I could walk across the back-lots to get to my Aunt Joyce’s house and go for a dip in the pool. That was a deal I could live with. And it worked, for a few days.

But, kids being kids, I began to think that maybe I could do my chores really fast, thus getting to the pool more quickly. So, one day I started the correct way, by tending to my rows and mounds by hand, carefully avoiding the tiny plants and second plantings of seeds as I removed things that didn’t belong, and watering the plants they were growing. I did this for about fifteen minutes, which probably seemed like half a day. Then, I got a bit more careless and started occasionally ripping away a seeding or two as I removed handfuls of weeds. I justified this, “Mom said some of the new plants might need to be thinned!” This still seemed to be taking too long. So, I found a rake, and started dragging it through the weeds (especially the ones that were prickly), ruthlessly ripping up the soil around them, which included both freshly planted vegetables and their weedy neighbors. My Mom came running when she saw this, and took away my rake. She showed me the little plants that had been cut off at the roots from my overzealous and careless gardening. She didn’t let me go to the pool that day. And, I didn’t feel much like it anyhow. I saw the little plants that we had worked so hard to grow, lying there and withering up in the sun. I felt bad for them, especially my Peppermint Patty Parsley. I tried to stick it back in the soil, but as we know, without roots nothing can continue to grow.

I never did learn to like weeding, but I did learn something about the value of patience.

This week’s Gospel lesson is a parable Jesus uses to teach his followers. It reminds me an awful lot of that story from my childhood. At first read, we might be thrown by some of the language: the furnace of fire and the weeping and gnashing of teeth…but frankly, that part of the passage isn’t really the point Jesus was conveying.  That final destruction of discarded weeds is what happens at a whole different time, after there has been so much tending from the gardener and all of the good fruits of the lovingly planted seeds have been gathered to nourish the family of God. The soil is good, the seeds are filled with potential, and they are lovingly planted, taking root in rich soil that continues to provide nourishment. Our Gardner…the Son of Man…Jesus is diligent and knows the identity and potential of every seed that he planted. He also knows that, like the garden of my childhood, no place on this earth is free from weeds. But it isn’t up to the plants to attack the weeds around them, and it isn’t up to those who work in the gardens to rip out ruthlessly everything that might be a weed, either. Jesus knows all of the potential of each and every good seed planted in that garden and how to help nurture their growth to the fullness of harvest. There is water…like our waters of baptism. There is sunshine, the radiance and energy of resurrection. There is air, the cool wind of spirit. There is support in the firmly planted roots of community and among the rows and mounds of other plants who are also growing together. There is, for all of us plants, the tender attention of the patient and loving gardener to see what fruit is emerging and to know which fruits are ready, exactly when they are needed most in the world.

The workers may get impatient; I know I did and often, I still do. But it is the watchful care of the gardener that keeps us from doing damage to others who are still growing. Jesus does not convey this parable suggesting there is something we should do to fix the garden.  This parable is about the Kingdom of God, which doesn’t need our interference.  It’s as if Jesus is saying to his followers: Listen to me: I’ve got this.  I am in the world, and I know what is here.  I know the plants, and I know the weeds.  In the end, all will be set right.  But right now, your job is to grow.

Our lesson today reminds us that we are plants, who are growing under the care of an attentive and loving God. We are being tended, good seed sown in good soil which is being nurtured into fullness. God never promises us there won’t be weeds growing along beside us. We live on this earth: we see the weeds along with the wheat and worry, perhaps, that the weeds will overpower us. But that is not the story of the Kingdom of God. The patient and loving gardner has a much better plan in mind, and knows all that he has planted. Not to mention the other possibility: what looks like a weed to us may be a plant bearing an entirely different kind of fruit. Their leaves may be bitter, but they have roots filled with the potential to nourish. Our job is to grow, and our reassurance is that in God’s Kingdom, all of the seed that God has sown is loved and cared for. God is the patient gardener of the dry and weedy garden of this world. God revives us with holy waters of new birth in Christ, and cools us with the consolation of the Holy Spirit.

Today, in the fullness of summer, take time to be still, and know that God cares for you. God’s love is tending each one of us, who are growing together into our fullness through the loving attention of our patient gardener, Jesus Christ, who knows all of our potential for growth. 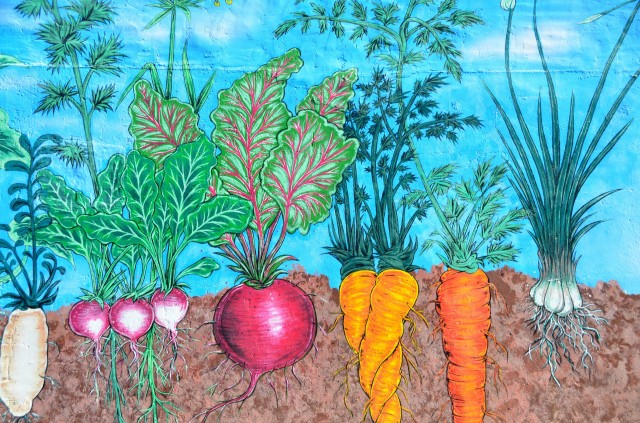 Professor of Social Work and Priest in The Episcopal Church, parent, teacher, learner, writer, advocate, and grateful traveller along this journey through life
View all posts by harasprice →
This entry was posted in sermons and tagged childhood, Christianity, garden, gardening, Jesus, memoire, parable of the sower, parable of wheat and weeds, patience, proper 11, sermon. Bookmark the permalink.

2 Responses to The Patient Gardner