There were only a few people left lingering in the church that afternoon.  I had taken off my alb after preaching and was readying myself to head out with my daughter for some lunch.  I saw one of the few parishioners remaining talking with a man who had wandered in post-service; he was looking for one of the ministers to pray with him.  But, the clergy were in a meeting and the nervous yet kind-hearted person to whom he was speaking made eye contact with me, non-verbally communicating, “Can you help?”

I don’t always know whether I’m being helpful.  If I am honest, most of what I’m asked for I know I can’t provide: money, work, housing.  But I can provide proximity, and listening, and prayer.  So, I smiled and moved to talk with him.  I explained that I was the seminarian, not one of the actual clergy.  That meant nothing to him, I realized.  I was starting to explain it when he just looked at me and said, “but do you minister to people here, you know, do you pray with people?” and I said yes.  “Then you’re who I need!” he said with enthusiasm.  I appreciated his confidence, although I wasn’t quite as convinced.

Billy and I walked from the parish hall to the church, and sat in the back of the nave.  He told me his story, and I listened.  Like many stories, his was filled with hope and with struggle; strengths mixed in with serious challenges to his daily functioning.  Once his words started to come out, he was a stream of consciousness of his hopes and his dreams; his disappointments and failures.  At the heart of his story was the question that so many of us face, “what do I do now?”

We spoke of his options, of those who he could trust to help, of service and people that I know.  There weren’t any easy fixes.  He knew that already.  I held his hands, and we prayed together for wisdom and discernment.  I offered what I had, a bus pass.  He was grateful but added, “this will help and I’m so grateful; but honestly your prayers mean the most.”

I knew he meant it.

I had just seen him off, and went to find my daughter who was intently examining the patterns in a stained glass mosaic, having been in ear-shot of the whole conversation.  We were standing in the alcove when a woman came in through the Red Doors, not hesitating for a second.  She was older, with a big pink hat that covered all of her matted hair.  She carried a large pocket book which contained the bulk of her personal belongings.  She had very few teeth, but a very large smile.  She looked like the church had been her destination, although service had been over for quite some time already.

When she held out her hand to greet me, the twisted and arthritic state of her extremities was more evident.  She immediately said, “ma’am, I’m hoping that you might have some soap, and a band-aid.”  I smiled, “I can help with that” I said, and motioned to her to follow me.  As we walked together, she explained her condition: scleroderma.  I looked at her hands, and was immediately transported back to memories of my Great Aunt Marcella who spent the part of her life when I knew her suffering from the same disease.  I saw the calcium deposits against her skin.  I felt some of her pain, involuntarily.  I showed her to a sink, where there was warm water, and soap, and towels.  She ran her hands under the water, gratefully.  I made sure she had towels, and left her to find some band-aids.

When I came back, I brought band-aids and some gentle cleansing wipes for her to put in her purse, along with a small hand lotion.  She smiled, “that will be enough!” she said.  We also prayed: for courage, for strength, for healing.

I walked her to the doors as well, sending her on her way with a bit more comfort than when she left.  I realized my daughter had been waiting for me for quite a while at this point.  When I found her she said, “So is this what it’s like, Mom?”  I was puzzled.  “You know, healing.  Like you preached about.  This is what it’s really like, isn’t it?”

I think sometimes we need fresh eyes to see what is really taking place in the ordinary moments of our everyday lives.

What if the real miracle isn’t in the disappearance of our human hurting, but in the sharing of human pain and divine grace?  Who am I to say that the warm waters of a bathroom sink aren’t the healing streams of mercy?  Why can’t healing be hand-lotion and band-aids, which appear right when we need them most?  Who am I to diminish the proximal gift of presence? Neither Sunday guest left feeling worse than  in their walking through the doors; each one left refreshed, enfolded in prayer.

I thought about the Gospel lesson that I had walked through in my sermon.  Healing wasn’t immediate, and it wasn’t without messiness, wandering, cleansing, returning, believing.  It rarely is. Healing is a process of our lifetimes, whether we are the one coming in through the Red Doors, or the one discerning their steps and offering what we can of our humanness to touch another soul.  There is healing in the action, in the faithful asking and seeking and receiving.  There is healing in the prayers of proximity, for all of us. 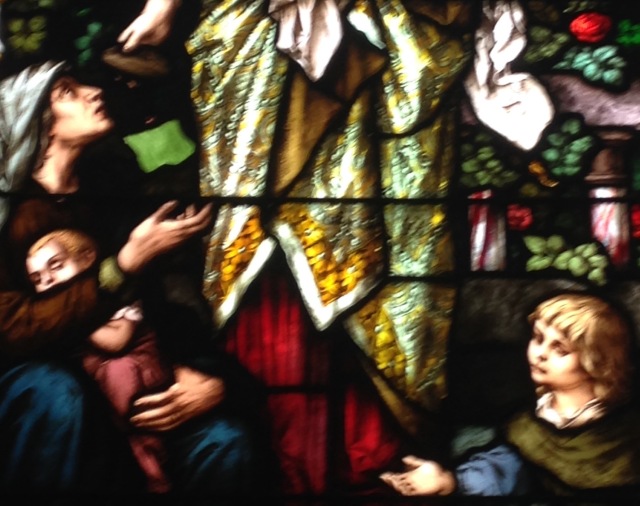 Professor of Social Work and Priest in The Episcopal Church, parent, teacher, learner, writer, advocate, and grateful traveller along this journey through life
View all posts by harasprice →
This entry was posted in Lent 2017 and tagged Christianity, church, empathy, healing, ministry, poverty, prayer, proximity, reflections, urban ministry. Bookmark the permalink.