I generally consider myself to be a relatively intact person of faith: in God, in people, in the slow-yet-progressing movement of humanity’s arc toward Justice.  This past week, I felt a lot of practical, daily acts of faith being put to the test.  First, I listened to my inner voice and set off to visit the seminary where I have felt deeply drawn.  This required me to hone my faith in Siri to direct me through West Coast cities in which I had pitifully little experience behind the wheel.  Within an hour after arrival, I white-knuckled the San Francisco Bay Bridge at an hour that was well past midnight in the time-zone from which I had originated, motorcycles zooming by my economy rental as I tried to hold back my desire to be awestruck by the surroundings.  I found my way in the dark to a building where I had never been in hope of it being the right one with an envelope with my name in the front lobby.  Once arrived, I navigated for several days by car and on foot through streets that bore no familiarity for me beyond brief mentions in books, while my handheld assistant guided my way.  I entrusted Siri with my final destination before my departure, too, bravely requesting her electronic assistance in guiding me from the now familiar Seminary grounds in Berkeley to Grace Cathedral in San Francisco.  It was only as I crossed Embarcadero Street that I had a flash of recall from a prior cab ride: Grace Cathedral is located on the upper slope of Nob Hill.

My economy rental and I were not quite prepared for this.

I breathed deeply as I turned onto California Street and looked at the near ninety degree angle rising up in front of me.  Siri instructed me to “proceed onto California Street for three quarters of a mile.”  She sounded calm and matter-of-fact, because there are no trolley cars and sudden mid-hill stop lights in Siri’s electronic existance.  I was not so calm, but my little car was in motion and I was committed to forward movement.  I am pleased to note that my mini-mobile and I made it successfully to the top, without incidents more substantial than honking horns and annoyed local drivers.  I have never, ever been so grateful to see a parking garage and hear, “You have reached your destination.”

This back-drop driving drama meant that it was an hour or so before I could fully settle into this sacred space in a fully-present kind of way.  I knew I had plenty of time before my late night flight, and I was pleased to find that this day of my visit serendipitously held an evening candlelight labyrinth walk.  My inner guide began to relax, and soon I settled in to a contemplative afternoon space of seeing, listening, reading, praying, and stillness.

Several hours after I arrived, there were only a few of us remaining in the space; a cathedral employee moving chairs into a circle around the labyrinth, a purple-robed leader of just-concluded evening prayer gathering up prayer books, two women slowly unboxing votive candles.  I was the only lingering after-hours visitor.  Since no one asked me to leave, I stayed.  A musician, carefully surveying the position of the Grand Piano, asked me if prayer was over.  I indicated it was.  He looked around, then smiled, and his hands reached out to the Steinway as if embracing an old friend.  Music slipped from his fingers and climbed the vaulting arches, resonant throughout the space.  The vibrancy of stained glass intensified, and the space came to life from the stillness of the day.  I gasped, filled with unanticipated awe.  The melody continued to unfold, rising in the emotive intensity of musical passion, then slipping into the subtle pianissimo of prayer.  I looked over to the musician, placing my hand over my heart and acknowledging his offering with gratitude for having been allowed to be present for its ascent.  I found a chair off to the side to silently wait while the set up was complete.

Candles filled the space; a second cloth labyrinth was unfurled.  Other musicians assembled with stringed sitars, wooden flutes, drums.  Two cathedral priests mingled, one filled with contagious enthusiasm and the other with loving quiet.  People began to file in, a humbling wealth of human diversity from business suits, to flowing robes, to threadbare clothes of the street.  Without formalities, music began and walking journeys commenced.  I watched, taking in the sight and sound and cadence of this scene.  After several minutes, I felt an inner prompt to begin to make my way to the labyrinth.  Just as I slipped off my shoes, a woman entered with her friend, and her guide dog.  It was clear that she was completely blind.  As I waited for a nod to begin my journey (insuring enough space for each traveller), I watched the woman calmly speak to her dog, who settled in picturesquely beside the statue of St. Francis.  She placed her hands on her friend’s shoulders, and the two moved behind me as I set my intention and took my first step.

Walking a labyrinth with a group is beautiful and humbling.  Some people are immersed in a deeply personal journey.  Others meet my gaze when I am passing.  I am cognizant of both, and for me this type of walk is a ministry in community.  I pray for those I pass.  I bow in gratitude to those who cross my path.  I receive unspeakably more with each act of giving.  On this walk, though, my spirit soared through the vaulted archways that seemed open to all creation, pouring out love and hope and peace.  As my mind emptied of descriptive words, my journey intersected with the women who had been behind me earlier.  I stepped aside and bowed to honor their path.  I will never, ever forget the expressions of both: perfect and complete trust.

Later that night, my tiny car glided effortlessly back down a hill which appeared bottomless, guided by Siri’s instructions to the airport.  I had learned to trust my driving and her navigating.  More importantly, my trust was renewed and restored for the larger journey of life, unfolding with divine grace step by step.  I caught a glimpse of that guiding grace in moments of stillness, music, prayer, and community.  I was gifted to have looked with awe into the face of perfect trust, of guiding grace.

Gratitude abounds in each small point of light. 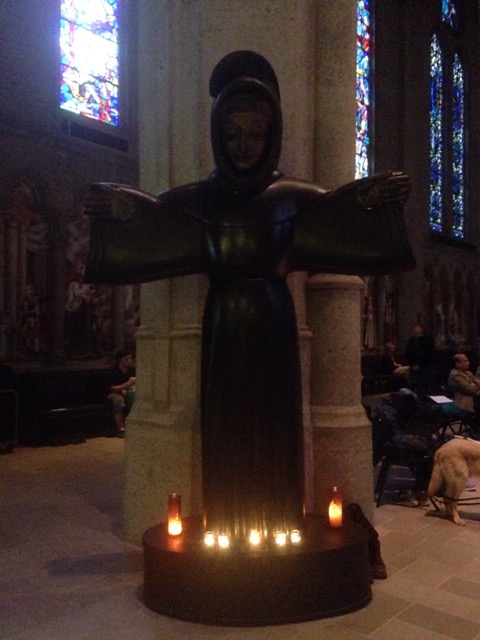