You never know when a moment of serendipity will emerge; I suppose that is the point of these random acts of cosmic curiosity. Today, as we were driving home after my daughter’s guitar lesson through a crowded part of the city, she blurted out, “Look! Plaid!!” as she pointed out a rack of flannel shirts outside a vintage clothing and whatever-else store. Normally, I might have kept driving toward the highway on-ramp. But, since I was still feeling the freedom of the last few days of my holiday break I said, “ok, if there is a parking spot in the next three blocks, I’ll stop.” Two and three-quarter blocks later, I was parallel parking.

She by-passed the rack of plaid altogether as soon as we walked past and saw it was sized to fit an XXL man rather than a small tween, but she quickly became intrigued by a display of vintage photographs inside. Having spent a summer learning to shoot 35mm film and develop black and white photos in the darkroom, she is now hooked. Sixth grade is clearly the year of flannel, guitars, and black and white photography, I thought. I breathed a sigh of relief at the end of the American Girl era…I was ready to move along from the girls of the year and their over-priced accessories.

I do not need even one more vintage object in my home, so I was rambling about trying not to look at anything too closely while she browsed through the old photos. Jewelry is always safe…or at least, small…so I peeked into a cabinet with a vast array of sterling silver charms and pendants. There were a few sweet little crosses and such which I sometimes pick up to make prayer beads. But one charm, almost buried beneath the others, caught my eye. The owner noticed something had grabbed my attention and came over to unlock the case. He even had a hard time figuring out which one I wanted to see.

He handed me several pieces of celtic knot silver first, thinking I would like them better.

No, the one underneath…yes, that one!. He finally found the one I had spied. I held it in my hand, feeling the weight of cast sterling silver and felt an undeniable connection between me, and that particular symbol. I looked at the beautiful, rustic celtic cross on the front of the pendant: 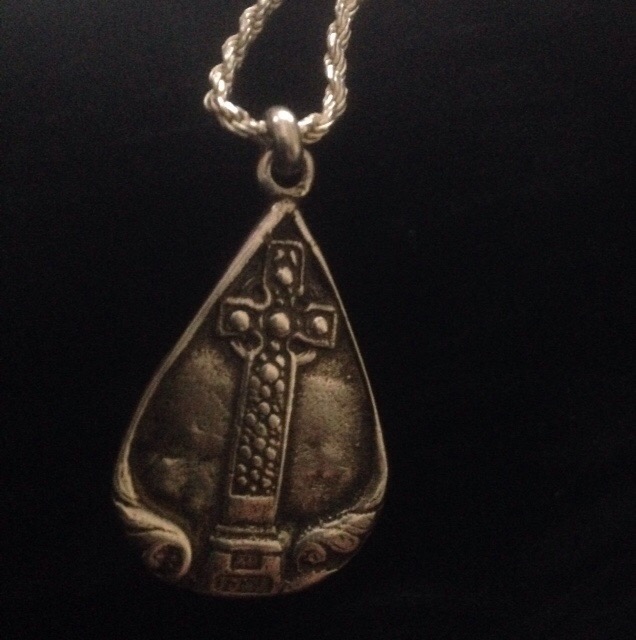 Then, I flipped it over. Of course…it all came together:

The Triquetra knot, topping the words, “St. Martin’s Cross” and “Iona” where the patron saint of my birthdate, June 9, lived out his days in the monastery on that celtic isle.

I knew, at that moment, I was supposed to find this. This little moment of serendipity, a charm of blessing and a reminder to center myself in this new year that I am stepping into. It’s an old piece, and it has a history I don’t know. But, it will remind me daily that the ancient past, the present moment, and the future converge and emerge with each step.

I paid for my purchase…a whole $15…and bought a few favorite black and white photos for my daughter, too. We walked the three blocks back to the car and headed home, both smiling contentedly at life’s serendipity.

I close and rest tonight with a prayer from St. Columba, vintage style of course: