Posted on November 2, 2014 by harasprice

It’s All Saints Day. This auspicious holy day at my church is marked by our annual “Saints Walk” where various parishioners dress and tell stories of the Holy Women and Holy Men who have lived, and worked, and worshipped in years gone by. As I stood in the women’s restroom trying to stuff my unruly hair under the wimple of a nun’s garb, I found myself wishing my PhD had given me more spatial relations skills. It took me three attempts to get every layer of this reproduced medieval monastic attire aligned correctly. I adjusted my cape, picked up my Crozier and wrapped my prayer beads around my stack of “St. Hilda of Whitby” prayer cards as I headed to the Narthex of the church to welcome those diverse souls who gather for worship in this community where there is neither a dull moment, nor a dreary liturgy.

I had read up about Hilda and knew which aspects of her story I wanted to highlight. Born in 614, this early royal Briton led a rich and full life as a grandniece to King Edwin. She was said to have been fair, loyal, and honest to those living in the lands she supervised. But, it would seem that secular leadership was not sufficient for Hilda’s life calling. At 33…which was mid-life in those days…she felt her calling to the church, and entered the monastic life. She had hoped to travel to France to join a holy order, but was called back to her own people. Eventually appointed as the Abbess of Whitby, she became the leader of this double monastic order, teaching and raising up future leaders of the church while attempting to reconcile the Roman practices of the Church with the Celtic beliefs and practices of those around her…beliefs she personally favored, but had the grace and wisdom to hold with equality alongside the orthodoxy that wasn’t as amenable to change at that time. She became known as a peacemaker, a leader in justice and fairness, and one who welcomed all to find a common good in the midst of diverse opinions and beliefs.

Every time I told St. Hilda’s story today, I would highlight parts that seemed to fit my audience, or that occurred to me from the stories I had read. Sometimes I would emphasize the welcoming, other times the bringing together of multiple sides to find common worship, and often what emerged was her profound female leadership at a time women had so few outlets for these skills and her willingness to respond to God’s call even in the midst of her already well-lived life. She said her own Divine Yes and the second half of her life was richly and spiritually blessed. The more I told her story, the more I started to deeply appreciate her in ways that just reading history can’t quite convey. When I found my parish family joking back at me about the parallels between this saint of old and my own story, I felt blessed. Honestly, that is the best word I can think of: blessed.

I began to realize the saint I was asked to portray today was likely not a co-incidence, either. I suspect my rector (who clearly knows me well) and some divine inspiration should both get some credit for that! Even after moving from costume to choir robe (and dealing with my resulting “habit hair’), I remained deeply grateful for my personal and intimate encounter with St. Hilda, whose lasting inspiration crossed time and distance to touch my spirit today.

On this holy day in the midst of a holy season, I close my night with a small point of light in honor of St. Hilda of Whitby as I say the prayer written in her honor:

O God of peace, by whose grace the abbess Hilda was
endowed with gifts of justice, prudence, and strength to
rule as a wise mother over the nuns and monks of her
household, and to become a trusted and reconciling friend
to leaders of the Church: Give us the grace to recognize
and accept the varied gifts you bestow on men and
women, that our common life may be enriched and your
gracious will be done; through Jesus Christ our Lord, who
lives and reigns with you and the Holy Spirit, one God,
now and for ever. Amen. 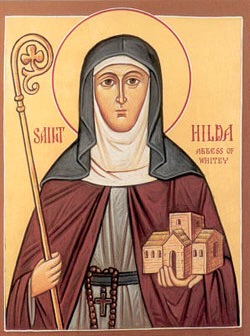 Professor of Social Work and Priest in The Episcopal Church, parent, teacher, learner, writer, advocate, and grateful traveller along this journey through life
View all posts by harasprice →
This entry was posted in Spiritual journey, work and life and tagged All Saints Day, Christianity, faith, history, justice, peace, prayer, saints, spirituality, St. Hilda of Whitby, women. Bookmark the permalink.

3 Responses to Prayer of St. Hilda