We Can Do It

On this gorgeous Autumn morning, I am sitting at a picnic table in a quiet grove of trees, catching my breath after a long week. The precocious tween that I gave birth to eleven years ago is down the hill on an archery course, dressed in skinny jeans tucked into knee high leather boots, with a flowing black shirt and her long hair braided back. She’s channeling Katniss Everdeen this morning, although there was more Krispy Kreme than hunger in her morning routine. This morning follows an evening with her friends, all dressed up for Cotillion in their party dresses and white gloves while learning the polite subtleties of dance and social grace. She was sure to put her own flair on it: safety pins in her hair, just for effect, and ending every polite dance with a little two-fingers pointed greeting to her dance partner, an homage to James Bond, and a reminder to the boys that she will be just as likely to lead as to follow. Be warned.

I love this child, truly.

She comes by her attitude both by nature and by nurture. She is the child of independent parents, to be sure. Its been more of a learning experience for her Dad and I to develop mutual inter-dependence with each other and to foster a development of community once we found a place to settle down and make a home here in Virginia. Who we are…all of us…is about this blending of individuality and collective identity. Sometimes, what I see reflected in my child actually speaks volumes about my own narrative.

Last night, before Cotillion, we were walking by the public library and she saw scaffolding that had been erected for some construction work. She lit up: “oh, take my picture here!” I tried to steer her toward the stately staircase and columns, but she would have none of it. I snapped a few photos as she wrapped herself arm and arm with the scaffolding in the same way she has been instructed to promenade with her partner in the dance hall. I immediately felt a calm rush over me as I watched the young woman I was raising standing solo and proud, arm and arm with scaffolding, making a power muscle with her other arm. She is going to be all right. I thought. And then I really took it in. She is going to be better than all right. She is going to be great. She already is.

She reminded me, standing there, of Rosie the Riveter.

I seem to find myself at a life cross-roads each decade. As I approached age 30, I was in a relationship that was not working, no matter how much either of us tried. I was the one that chose to end that dance, and to step out into the solo unknown of figuring out who I was and where I was going. I meditated, I prayed to whatever divine force of the Universe I could believe in during that time and place in my life. I boldly decided to make a cross-country move for new beginnings, and to work toward my PhD. I moved in early June to an apartment I had found the month prior. I moved the same week I turned 30.

I wasn’t alone, though, not really. First of all, Divine Presence was with me every step and I knew this to the core of my being. Pragmatically, my best friend since high school was there to be my listening ear on the other side of the country. She sent me flowers for my 30th birthday, and surprisingly I also received a beautiful plant from my brand new colleagues who knew I was relocating solo a few months before school to work with them. I didn’t have any birthday plans, but I decided to visit some museums near my newly set up apartment near Forest Park in St. Louis. I had packed only what furnishings would fit in a mini-van, so the place was pretty sparse.

I walked through the Missouri Historical Society museum and took in the spirit of adventure on which my new home town was built: westward expansion, rugged frontierism, the first machine taking to flight, “The Spirit of St. Louis.” When I walked through the gift shop on my way out, there she was. Rosie. Rosie the Riveter in her iconic red and yellow, bearing the slogan, We Can Do It.

Yes, we could. I hung Rosie proudly in my kitchen so she could remind me every morning.

Some of the first friends I met in St. Louis were women I found on a sign in a New Age Bookstore. Some women were forming a SARK-based, “Succulent Wild Women” group. I was all in. This group became my sisterhood, and although we were different people with different backgrounds and life circumstances they became my sisters in adventure. Over the years, we would celebrate, cry, dine, travel, laugh, and be real together. Although we all had other friends, colleagues, and families there has been a special, irrevocable bond between four of us in particular. We drank a number of cups of coffee and glasses of wine with Rosie smiling above us in my kitchen.

We Can Do It

One of my succulent wild women friends, in seminary at the time, officiated the outdoor ceremony in Forest Park ceremony when Michael and I decided to elope several months after we met. As we set up house, while pregnant with my daughter and preparing for her arrival, I bequeathed Rosie the Riveter to another one of my friends when she unexpectedly divorced. The spirit of Rosie was living in me now, and I knew it was time for her to find a new home. Rosie made the rounds, reminding one woman after another that as alone and out of place as we may feel at times, we are never alone.

Last night, I came home after the Cotillion and post-dance FroYo and flopped on my loveseat. I was tired, and it had been a busy week of work and parenting, as well as doing the ministry work that feeds my soul. I had posted a picture of my daughter with the scaffolding on my Facebook wall. My friends were commenting the same sort of awe that I have of her. I noticed I had a message from another one of my succulent wild women friends, though:

“I just wanted to tell you that I have a friend who is going through a divorce and I just mailed her a rosie the riveter poster. The tradition continues.”

I realized something, in that very present moment, about the spirit of community. We Can Do It. Independent, but not alone. Embracing doubt which is the exact same thing as having faith. Embracing friendship, no matter where we may reside. Sharing strength, which is the core of community. Passing all this along to our peers, to our daughters, to the corners of the world where we live and breathe and minister.

We are going to be great. We already are…. 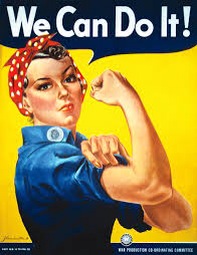 2 Responses to We Can Do It